John, what are your thoughts on CSATNET?

Misesian raised this point in a comment. Thanks Misesian. I have two photos for you:
xG's "special" vehicle featured from their Fort Brag debacle deployment; 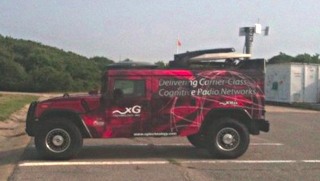 ..and Carolina Sat's own "special" vehicle featured in their website... 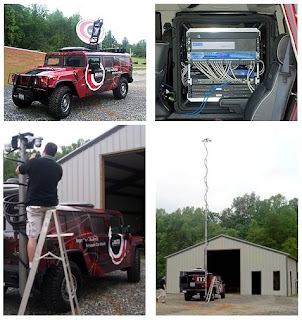 Hmmm! Does that Hummer look familiar? What was "special" about xG's vehicle was that it wasn't theirs..! It suggests there's some "special" relationship going on behind the scenes. Maybe involving a vehicle rental + press release scheme..?!

Also note that this transaction is termed a "12-month sales order",  not just a "sale". No money received as yet and is dependent on delivery of equipment in Q2 2012. Still leaves plenty of wriggle room. We've heard stuff like this before: sales orders (PC3 and Liketone), letters of intent, trial agreements, etc. No money ever changed hands.


Also note that, just like Force 3, liketone and the rest CSATNET conspicuously fail to mention their relationship with xG as a "Partner" on their partner pages. Oversight? Maybe, but it hardly seems like they are pinning their hopes to the xMax bandwaggon.


Maybe this is because their system isn't even ready yet, after for years saying it was! Today's announcement is a doosie:


John Coleman, CEO, xG Technology. [said]"Our next challenge will be to make a system of affordable devices for volume production. Given the milestone we have achieved, I have every confidence that our team at xG will make this happen." ... Scott Garlington, Vice President of Engineering at xG Technology. [said it was] "the aim of making the xMax system commercially available later this year."

Ohh, Scotttt, ohh Johhhn! xG said this years ago! You ordered 10,000 phones years ago...! Before you switched xMax to newMax. Now it's back to the drawing board - again..! NewNewMax. Mooohahaha!.

"We have no knowledge of the company and have never evaluated their technology or proposed products".

Hello xGers! My apologies for the lack of activity on the blog. I've had other things on my plate.

Interesting news about Care 21. It does, as has been mentioned by Beerson and Balkur over at the iii.co.uk boards, have all the hallmarks of another "Far Reach" episode. Finding anything out about Care 21 is a bit of a paperchase. Marcus Losada definitely exists and his Twitter page shows he has fabulous taste in wines too. My hat is off, Sir. 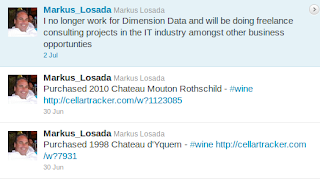 Notice that he's looking at "other opportunities" from 2nd July last year. Presumably that includes the Care 21 "deal". Care 21 Ltd also exists their only current director is a man called Martin Holliday, Markus was a director but resigned.

What's relevant about all this? Well, the link is Godalming, Surrey, UK. Markus lives there, the telephone number for Care 21 is there. Who else do we know that lives in Godalming? 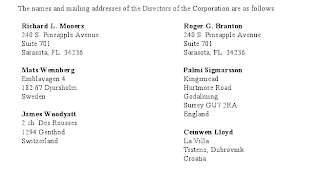 Yep. Our old pal Palmi Sigmarsson! Just around the corner from Markus. Palmi is, if you remember, the man who shorted his own company, the man who was closed down by the finance inspectorate. What could he be up to? Was it an attempt to raise the shareprice so he could dump even more stock? (He is dumping: He used to have 22 million shares. Now he has around only 7 million).

Did he talk Markus into a deal? Did Markus (or his investors) then do their homework?

Whichever way round it was it seems that this "deal" can be added to the long list of "deals" that never were, like Far Reach,  Gama, Telefonica, and all the rest.

Edit (13/1/12):  It's not surprising they didn't pay up considering today's news that the network isn't ready (when they've been saying for years that it is...):


Scott Garlington, Vice President of Engineering at xG Technology [said they had] "the aim of making the xMax system commercially available later this year.”

So far the only person idiotic enough to pay money for a network that doesn't work is that reptile Marc Dannenberg. Moohahaha.
Posted by John Prescott at 06:45 17 comments:

So we finally have an announcement,  As far as I can make out, a Whitewash waiver  is one more usually used in Hong Kong and Singapore, although it has been used in the UK. It asks for permission for the entity (MBTH in this case) to buy more shares, whilst avoiding the mandatory trigger of a takeover - whatever the other shareholders wishes may be, or whatever the takeover provisions may state.

So what we have here is one major shareholder (presumably Bohman) is playing hard ball. (Good on you Johan). He's agreed that 50m more shares can be allotted, but has demanded certain conditions be met. We don't know what these conditions are, but they probably involve Johan getting lots of cash. So Mooers is trying to go for a Whitewash to avoid paying the cash to Johan and the other shareholders. Sneaky. Underhand. Devious.


It's possible that this route is fraught with legal pitfalls and bear traps. More news when I've done more research into it.

Hilarious press release this morning. Remind me never to use the same courier service that xG use: Finally we have delivery of the Army trial equipment... 140 days into a 180 day trial. And that, according to xG, is a "timely delivery"!

The last of the quote is pretty telling. Basically it says, even though we've only given you 40 days to test it - it doesn't currently work : "[xG will] listen to them, to learn from them, and then revise our trial product to reflect their recommendations and better meet their needs."

Edit:
and the last line of the 'about xG' is also notable. Nothing new, but in this context boasting about the number of your patents isn't a great idea. Some inconvenient person may compare yours to, say, Harris communications who is the current vendor of most Army radio systems. Have a look HERE at the US Patent Office filings for Florida. Harris are near the top. Scroll down to see where xG are.....
Posted by John Prescott at 23:52 178 comments:

The inevitable follow-up to the Chimay story. Aww James Woodyatt. All that money gone. Now you know how the Maddoff victims felt when your company Optimal was a feeder fund for Maddoff. Such a shame.

Well Mooers Branton are at it again. Another of the announcements whose headline says one thing, but the body of the text means something completely different. They already have two 'loans' out to their own company, xG, upon which the terms are; when the left hand (xG) doesn't pay the right hand (MBTH) then xG becomes property of MBTH. You would've thought that enough, but now a new announcement. Why? Well it's complicated.

Digging into the legalese of the Articles of Association (link Google Doc) you find that if a group or individual acquires 50% plus of the voting rights then they must make a cash (or equivalent) offer for all the xG shares. The price to be "not less than the highest price paid by the Offeror for Shares of that class or series during the Offer Period and within twelve (12) months prior to its commencement".

Looking at the figures from the last Alleby report, the voting rights that Moores Branton currently have (which include the voting rights they have over Joe Bobier's shares) come up to 43%. Obviously any new major shareholding they take on will take them over the 50% trigger.

This compulsory offer can only be waived if 75% of the other voting rights (i.e. not Mooers Branton's) agree to it. In practice this means Palmi and Bohman/Lloyd, because of the remaining voting rights (once you strip out Mooers Brandon and Joe) Palmi has 25.7%, and Bohman 24.0%, with every other small shareholder (presumably including those outstanding unsold shares from the ACH collapse) making up 50.3%.

The announcement goes on to say that they haven't received that agreement, so Bohman, and possibly Palmi are digging their heels in, which would trigger the takeover agreement and an offer for their shares. If the agreement came to place then ALL of the $10m would go into buying out Bohman and Palmi. This would mean no money left to try to tide over xG.

Oh yeah. That $3.5m. Did anyone see conformation that they've actually coughed up? Me neither. That announcement said "have agreed on terms under which, at MB Technology's discretion". Maybe their discretion advised against it, and "Up to" is Mooers speak for nothing? Yet they propose to be paid back $5.2m. Do the math.

Then the bribery comes. Notice the "Conversion Rights" term. In it it says that if Bohman/Palmi agree to waiving the takeover within 15 days, MB will pay $0.25, if they don't it's only $0.10 a share.

All this is complicated, and made into a cat and mouse game, by what I suspect must be an imminent legal challenge from Bohman/Lloyd, put in place by Lloyd's resignation from the board. After all they bought around $28m of shares, and the takeover would only get them back between $2 to $5m depending on the offer price. Frankly it's an insult, but it is hard cash.

The takeover would result in xG folding for sure as the money would all go to paying off the shareholders. But perhaps Bohman/Lloyd may decide suing a collapsed company may be more problematic than suing a trading one. On the other hand they have been mis-sold in the most blatant and shameful manner. A simple demonstration to the court about the impossible nature of the xMax modulation should persuade the most cold-hearted jury, and should result in a payout at least an order of magnitude greater than the pitiful return the takeover would bring. If xG are still there to sue. Interesting times.
Posted by John Prescott at 13:10 226 comments: