Nice that little old xG with its fair share of crazies has caught the attention of the world's most prolific litigant. Jonathon Lee Riches has graciously taken up the case of Bank Hapoalim against xG, claiming that xG stole his intellectual property and hid it in a offshore account vault in Switzerland 20 miles south of the swiss alps. Damningly he also claims that xG are spying on him from the vents in his room at the mental hospital he calls home. They also made Denis Quaid's voice sound in his ear and they have tagged his clothes with GPS. All perfectly reasonable. Considering it's xG. 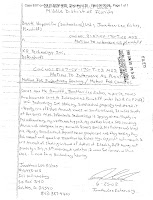 Edit: Read more of his genius HERE.
Posted by John Prescott at 08:31 8 comments:

This is how Chimay got embroiled in xG; when Guy rang James to steal his money, James suggested that he invest in xG. I suppose in order to convince him he was a serious player Guy went along with it. The investment was meant to be in a 'Bridge fund” (nothing to do with ACH's Bridge investment network - I think, although wouldn't it be sweet if it was.). This fund was to lend money to companies that couldn't raise money on the open market. So I suppose that the share purchase was meant to be in lieu of a loan, so that Chimay could show they were actually making investments. Sadly for Guy his appetite for stealing was greater than the rate of flow of cash into the fund, and there was no money to purchase the shares. The million he put in was borrowed from another investor – it wasn't his money. xG are trying to get the money from Prince Phillipe de Chimay, which will be interesting, and I hope futile.

In another wonderful moment of irony Guy has been caught red handed falsifying bank account records. Guy allow me to introduce you to Rick. He shares several of the same interests, I'm sure you'll have lots to talk about.

Edit: The New York Post says the authorities have only found $131 of cash in his accounts when they arrested Guy. Doesn't look good for James getting his $670,000 back. Such a shame.
Posted by John Prescott at 05:40 No comments:

Just a quick one on why the Townes deal fell through. In essence Rick happened. He made unrealistic demands, and when Mr Townes did his homework and called Rick a Crook the deal was off. Makes one wonder: Three people have independently said that Rick has an account with shareholder monies in it. Kromka says that he was open to “obscene liability” (possibly falsifying accounts? Consistent with his behaviour at iDigi...), and Mr Townes discovers he's a crook. Rick is a moron, mad, unstable, and a thief.
Posted by John Prescott at 05:37 No comments:

Court Case One: Kromka and the “Two Crazies”

The Bohman v Kromka /Rodrigue case is a gift that keeps on giving.

I think the hornets nest has gotten too messy. I think Rick is dangerously out of control and could open up the company and the board to obscene liability – if he hasn't already. As for Treco – I feel the same way although our attendant risk there is not so much explicit as profound distrust. I'm literally loosing sleep about having to deal with either one of them or alternatively having to go forward in good faith and represent them to a third party......

I can't stand thinking, plotting or frankly worrying about how we are about to get hurt (or not paid) any longer....I don't want any more of the same shit – always worrying that we are going to be sued by either one or both of the crazy people (Treco and xG).”

Most interesting for me in the court documents (aside from 100% conformation of the information from my sources) is the mental state of both Rick Mooers and Bohman. They both seem utterly mad. At one stage Rick confesses to Kromka that he had “always been sad and wanted to kill himself every day,” and pours out his personal problems to him time after time. He says the directors want rid of him but do not have the “balls to fire him.” Wanting to merge with Treco, then not.

Bohman is equally irrational. Hiring Kromka, firing him, hiring him again. Paying him at irregular intervals. Agreeing to him having 8% of Treco, then changing his mind. Worse for xG, Bohman assures Kromka that the scheme is fully funded, then leaves it to Kromka to discover the truth...

Kromkas relationship with xG began at the infamous meeting in Twin Palms Hotel in Phuket Thailand on November 28, 2008. Present were Kromka, his partner Vincent Ronquillo, Bohman, Lloyd and of course our Fredrick “Paradigmshift” Wahlman and his girlfriend Karolina Purar. (So confirmation It WAS Frederick Wahlman who was working behind the scenes who brought in both Bohman and Kromka to xG.) Wahlman was to be Kromkas immediate superior at Treco. However as we all know, subsequently he was thrown out, leaving Kromka dealing with Bohman direct.

The things he was promised at the meeting persuaded him to turn down a highly lucrative broking offer in Chicago and join Treco. Within a short time he was also invited to the board of xG. Thereafter he learned the shocking truth that

“xG and Treco were soon facing cash shortages and urgently needed further infusions of outside capital. Despite his earlier insistence that he would not have to raise capital and the assurances from Lloyd and Bohman that Treco would assure xG’s liquidity, Kromka was suddenly drafted for the task of seeking outside investors for xG and Treco. He, along with co-defendant, Francois Rodrigue, then set about trying to generate interest from venture capital firms and other respected funding sources.

Kromka and Rodrigue did pretty well in the circumstances. Using their contacts to obtain two very hot leads for funding. One for a network in Panama, the other for the US (Beechtree). However Kromka obviously has done his research and acknowledges that there were

“two main difficulties in utilizing venture capital firms and other funding sources were Treco’s and xG’s reputations (as well as the reputations of their owners), and uncertainty that Treco would make the necessary payments pursuant to the Infrastructure Agreement on time, or indeed at all. Furthermore, xG’s product roll-out was constantly being postponed and the word in that sector of the business world was that xG had nothing to offer.”

Obviously Beechtree would want conformation that everything was Kosher with regards to the technology, but the Due Dilligence they planned was the last straw for Rick – the reason? They'd find out the tech was nothing special.......

If it wasn't difficult enough trying to assure potential investors it soon became clear that Rick and Johan were as crazy as each other.

“Dealing with Treco’s and xG’s management presented an even more challenging scenario. Neither would communicate with the other, so Kromka many times had to serve as the go-between, which placed him in untenable situations.... Bohman and Lloyd avoided speaking directly to Mooers and told Kromka that the reason for this was to increase Mooers’ “insecurity” in their relationship and that they will only talk to Mooers when 'he ran out of cash' and they constantly discussed with Kromka the idea of suing Mooers and taking over xG

”. Then when critical descisions had to be made they would “be out of communication with Kromka” entirely, leaving him hanging.

“Mooers did not communicate with Lloyd and Bohman because, among other things, xG continually underperformed” and even though more and more “desperate to obtain financing for xG” would not follow any advice Kromka and others gave him. “In addition to all of these distractions and irrational behavior, xG was nowhere closer to producing a market-ready product, which made raising capital even more difficult.” xG were “inable to put together a coherent plan to monetize the xMax system.”

Reading the updates of the case it seems as if Treco/xG will fail. :-D. Their main argument is that Kromka is in possession of some secret information – but are unable to specify exactly what the information is, or even what format the information is in. I suspect that the info they were trying to protect is that both Mooers and Bohman are mad as hatters, and that neither has the cash they claim they do. The good news is that Kromka has now counter sued for the money he gave up from the other broking offer, and for the shares he was promised in Treco and xG (don't bother Richard they're worthless). My feeling is that if he can prove the offer existed he will win, and it will cost Bohman $3+M.
Posted by John Prescott at 05:12 No comments: