xG in the Wall Street Journal!

xG are going up in the world. Today they had a mention in the preeminent investment organ - the Wall Street Journal. The WSJ describes them pretty accurately as:

The article centres on the Guy de Chimay case. Sadly for James Woodyatt it looks like he's been Ponzied and won't get his $670,000 back. What a shame. James knows all about Ponzis but he's usually the one separating the victim from their money rather than the other way round. His old company Optimal Asset services, where he was Senior Vice President was a feeder fund for the daddy of all Ponzis - Bernie Maddoff.
Posted by John Prescott at 16:17 2 comments: 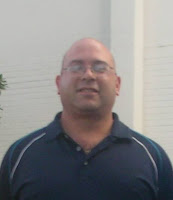 Since Marc thinks he’s so popular it only seems fair to add to his fame with some of his stuff in the archive (top right). In case you are one of the fortunate ones who doesn’t know who Marc Jason Dannenberg is he’s one of the unregulated stock promoters around xG. He’s also an asshole. And fat. And ugly. And a psychopath. And an unstable pot head whose Yahoo name is ‘Loverofweed’.

Originally he was employed by Monroe Parker - a mob controlled Boiler Room in New York. After some FSA warnings and fines he moved to the Costa del Crime in Spain and was employed by N.C.R - another financial institution Boiler Room. In between stuffing his face with whatever fatty products that were to hand he sold stock in the iDigi Fund to hapless investors. Here is where his connection with Rick Mooers starts:


"I raised a lot," Dannenberg said, but noted that the money wasn't headed for a direct investment in iDigi. His job for his entire 13 months at N.C.R. was selling the iDigi Fund, an offshore entity into which N.C.R. plunked 1.3 million shares of iDigi Communications that it bought from Mooers.

After an initial meeting with Zafiroff in Sarasota, Mooers traveled to Marbeya at least twice and made at least one presentation on iDigi to the N.C.R. brokers, Mooers said.

"Rick Mooers came here to Spain," Dannenberg said. "He knew all about it. He knew he was getting pennies on the dollar for iDigi. Yes, he knew it was called iDigi Ltd. He gave a speech to all of us.

In its suit against iDigi, the Icelandic pension fund is more specific about the N.C.R. scheme. The suit claims N.C.R. raised $10 million from numerous investors in Europe. "N.C.R. received approximately 50 percent of these funds as its commission or fee," the suit said.

So the iDigi Fund, was a scam of a scam. 50% of the cash going straight to an offshore account. This is a scheme that Dannenberg returns to again, as we shall see.

After N.C.R. was closed down Dannenberg goes freelance, selling the shares of xG Technology, whilst projectile vomiting about xG all over the internet. Some of his ramping about xG going to $100 a share would make a psychologist gasp. (Check out the back records of iii.co.uk and look for Marcsanpedro.) All the time he was ramping on the bulletin boards and attacking any critic he was selling xG shares to unfortunate investors - even though he was not licensed, or ‘officially’ employed by xG. But these shares weren’t free market shares. Oh no. These shares are ‘Regulation S’ restricted shares owned by one of the xG Directors Palmi Sigmarsson.

Let’s pause for a minute.

Let’s think just how illegal and downright dodgy that is.

These are directors shares, that can’t be sold for at least a year after lock up. Yet Marc is selling them with the full knowledge of a director. A DIRECTOR of the company. This avoids any stock market announcements about Directors dealings. He’s selling them for HALF the then market rate. HALF. How much confidence is the said director showing in his company turning a profit? Umm. None. He knows they have nothing. He’s selling up. After lock-up he then ends up shorting his own company...!

These shares, under the terms of admission of xG to AIM, cannot be sold to American citizens. Yet Marc is merrily punting them to at least two Americans that we know about.

Then Marc, goes one further. In an echo of the iDigi Fund, Marc sets up Flashcomm. A Spanish company that would buy a territory from xG. In his derranged mind, he uses this as an attempt to extort more money from his customers! Buying a territory would not only raise the xG share price, but also raise him hundreds of thousands from his poor customers.

But Marc’s greatest achievement is being a colossal asshole. A delusional, slack-jawed, lard-arse, paranoid-pot-head, asshole. A quick Google of his name will reveal the extent of his stupidity. But he’s also a nasty person. His persecution of Phil Karn who had correctly predicted that xG’s radio method was bogus is a thing of internet legend. He repeatedly called him for months, on one occasion 38 times in a single hour. Thirty Eight times. Each time threatening to kill him, or wish some misfortune on his wife. Never give this guy your ‘phone number.

Email for Restricted Stock
Receipt for Restricted Stock. (check the ‘properties of the Doc. Officina is Marc’s office. There’ll be more with this property another day..)
Some of Marc’s Customer list all have bought restricted xG Shares.
Some more, and him punting the Flashcomm idea to them.
Flashcomm introduction
Hilarious Marc Email to xG. Note how xG lied about technical claims, and how Rick has an account with shareholder monies.
Posted by John Prescott at 10:37 38 comments: 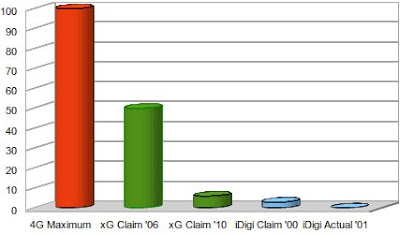 Now that we have a new brokers' note, let's have a look back at the last one and compare.  In 2006 xG obtained an impressive 50 Mbps in their trials. ("These are actual figures, not theoretical" their broker Hitchens noted.) This was well in advance of any modulation available at the time. Now in 2010, following a technical review from PA consulting on behalf of Allenby, they come up with a maximum theoretical figure of 6 Mbps - that's only 12% of their previous "actual" speed...

But wait. Hindsight is a wonderful thing. This has all happened before. In 2000 iDigi were claiming 3 Mbps for their system. Again, this was well above any other figures the industry were quoting. Again, these were real figures, tested (by xG themselves - in a fraudulent demo.) But in 2001 when the system was tested by Katapult it only gave performance as low as 0.04 Mbps - that's only 1% of their claimed speeds, lower than a basic modem!

I see a pattern emerging...

Rich Tehrani: If you think xMax works "as advertised" I've got a lovely perpetual motion machine I'd like to sell you. Sure, it's only 1% efficient but...
Posted by John Prescott at 07:20 2 comments:

You'll notice to the right a new widget called "xG Document Archive". This is intended as a repository of interesting original xG documents which will be added as and when time permits. First up are some of the various court documents I had on the hard drive. You'll need a (free) Gmail account to view them.

Lots of fascinating reading - (especially for the new shareholders out there). Unauthorised Icelandic shares...a Dominion Group court-case (Ricks previous company)...Chimay's being sued by the world...xG's original share cert to Falt (and the underhand cancellation of the company to make it invalid)...

But most, most, fascinating of all is to read the original court docs of the iDigi affair. xG really is just a continuation of the last scam. Incompetence. Overstated performance. Proprietary equipment that wasn't. Same old, same new, shit that they try to pull on investors.

If anyone's got some documents they want put on the archive drop me a line.
Posted by John Prescott at 14:35 48 comments: